In a society that seems to be increasingly motivated by personal gain, be it financial or otherwise, altruistically offering your energy, knowledge, and more importantly your time, towards a cause you find meaning to is a refreshing deed for the soul. Although I have participated in voluntary work before, the academic workload over the past three years has not allowed me to do so. Until now! Inspire Foundation was established in early 2019 by a group of researchers/employees of the University of Nottingham as well as individual from across the city. The goal? To bring together and integrate new and established communities through cultural and educational events and activities.

Back in April, during a conversation with a friend (and one of Inspire’s founders), he informed me about the project they were putting together and the STEM club for young people they had just start running. I have always enjoyed working with kids (I have spent more than two years doing work on the social-emotional development of pre-schoolers) and I thought it would be a great opportunity to get involved, once again, in voluntary work. I decided to attend one session which was a broad and palatable introduction to computer science. The youngsters were enthusiastic and after the presentation, we spend some bonding time together. It was apparent to me at this point that this was an initiative worth getting involved with.

The main project of the foundation is the “Victor Tudorica” Bursary and Saturday Club, in memory of Victor Tudorica, a student at The University of Nottingham how unfortunately passed away back in 2016. With the goal of promoting and delivering educational activities and workshops in the STEM (Science, Technology, Engineering & Mathematics) fields this initiative is aimed at young people between 11-15 years of age from disadvantages and potentially vulnerable backgrounds. The club ran for 6 months (March 2019 – August 2019) and it included a vast array of activities ranging from building LEGO robots to discussing skills for the future and from creating short movies to dismantling old computer hardware. The club also paid a visit to our own Mixed Reality Lab where we had the chance to talk to researchers, have fun at the VR playground and get our personalised laser-cut tags.

The most memorable activity for me was the movie-making session. At the previous meeting, we formed groups of 3-4 people and decided the theme of the short movie as well as set up our storyboards. We had, therefore, the structure of the story ready and upon our arrival, we decided what roles each one will play, where we are going to shoot our scenes and what kind of props we will need. After finishing with shooting, we spend a good amount of time editing our movies which we then presented to the entire group. It was an excellent activity for the young ones, being both engaging and informative since they learned how to use a camera and editing software as well as solving problems on the spot.

After the completion of the Saturday Club, I was wondering whether to get more involved with Inspire Foundation in the upcoming year and a couple of weeks ago I received a message regarding Inspire’s annual general meeting. Walking into the meeting, I was still not sure whether my academic work will allow me for a more committed role in the charity. These doubts, however, were waived away after experiencing first-hand the commitment and engagement from all other members. I decided, consequently, to become a trustee for this year. It is, indeed, the first time I become involved in this way with a charity and I very much looking forward to this journey.

Inspire Foundation has already several plans for the upcoming months, ranging from events with communities around Nottingham to re-initiating the Saturday club and engaging with the University of Nottingham in promoting STEM activities. Last week, for example, we participated in an event organised by the Polish community in which we set up an exhibit with our Lego Mindstorms Robots. Three kids from the Saturday Club were also present and helped out with the event. I will try to keep you updated on our activities with another blog post in the near future.

My overall experience with the Inspire Foundation has been nothing less than fantastic. Engaging with an organization that provides teenagers with the opportunity to explore new routes for their future as well as allowing me to meet new people and interact with local communities is one of the best decisions I have made this year and I would highly recommend for everyone to get involved. 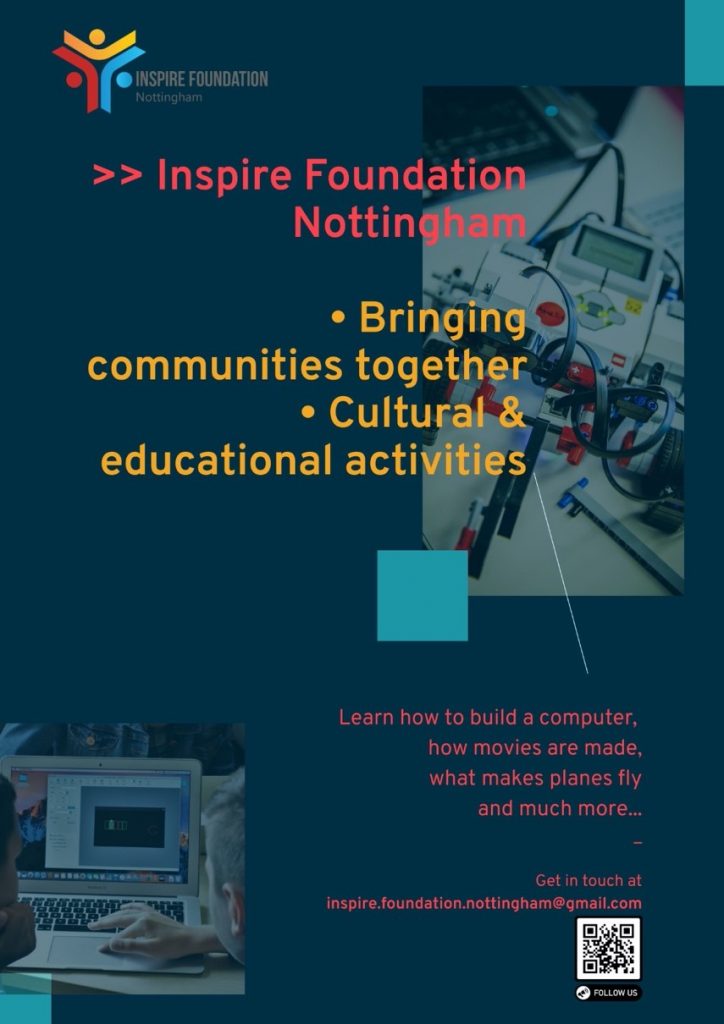