I participated in the 2022 BMVA Computer Vision summer school which was held at The University of East Anglia. The summer school was aimed at PhD students and early-stage researchers who were involved in the research areas of computer vision, image processing, data science and machine learning. The event was held between the 11th – 15th of July and consisted of a full week of lectures from a variety of researchers who are experts in the field on a wide array of computer vision topics with an emphasis on the latest trends that are pushing the field forward. In addition to the lectures, there was also a programming workshop and social activities in the evenings such as a computer vision-themed pub quiz and a dinner held at Norwich Cathedral.

As the lectures covered a wide range of topics not all of them were strictly relevant to my own PhD project and research interests, although it was useful to be exposed to these other areas to gain some tangential knowledge. The event started with a lecture by Ulrik Beierholm on cognitive vision, how it functions and how it compares and contrasts with similar computational vision systems such as Convolutional Neural Networks (CNNs). As my own background is in cognitive psychology and computational neuroscience, I found the lecture very engaging, even if it was mainly reiterating ideas I had already studied during my Masters’ degree. The afternoon of the first day was given to a programming workshop where we were given tasks on a Google Colab document to help familiarise ourselves with using PyTorch and also programming some of the key parts of a deep learning model pipeline. Although these were fun and useful tasks, we were not given enough time to complete them as much of the first half of the workshop was taken up with technical issues in setting up the guest accounts to use the labs computers.

The second day started and finished later than the first, with more lectures and an event in the evening, a structure followed throughout the rest of the summer school. The first lecture of the day was on Colour by Maria Vanrell Martoreli. Going into this lecture with no expectations I came out of it having found it very useful, with a much deeper understanding of the role of colour in the interpretation of objects in an image, both in human and machine vision systems. These were followed by lectures on image segmentation by Xianghua Xie and local feature descriptors by Krystian Mikolajczyk.

The image segmentation lecture presented some of the latest methods being used as well as some of the common problems and pitfalls encountered by researchers implementing these methods. While these two lectures presented a lot of well-articulated ideas in their respective areas, they were fell out of my own research interests so I don’t think I got as much value out of them as others in the room.

The last lecture of the day was a rather densely packed overview of deep learning for computer vision by Oscar A Mendez. This was a very engaging lecture and with a lot of information including some good refreshers on more fundamental architectures such as MLPs and CNNs and a very intuitive introduction to Transformers, a rather complex deep learning model which are currently very popular in many research areas. In the evening we went into Norwich city centre for a bowling social event.

Wednesday morning consisted of lectures on Shape and Appearance models by Tim Cootes and Uncertainty in Vision by Neill Campbell. Both of these were conducted online over teams due to the presenters having caught covid after attending the CVPR conference the previous week. The shape and appearance models lecture was informative but not of much particular interest to me but the uncertainty in vision was quite interesting and the presenter managed to include a good level of audience engagement activities despite being over a webcam.

After lunch we had a lecture on generative modelling by Chris Willcocks. This was a very interesting lecture as it covered the current trends in generative modelling (e.g., GANs, Transformers) and also looking at the architectures which have the potential to be the future of the field such as diffusion and implicit networks. As my own work looks at GANs, I found this talk to be particularly enlightening and also comforting as it agreed with many of my own arguments, I include in my thesis such as the current issues with using FID as an evaluation metric. In the evening we attended a dinner at Norwich Cathedral which gave everyone a good time to network and discuss the week’s events with other members of the summer school. 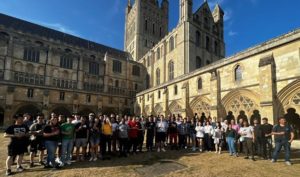 Thursday consisted of another full day of lectures on various topics in Computer Vision. These were Unsupervised learning by Christian Rupprecht, Structured generative models for vision by Paul Henderson, 4D performance capture by Armin Mustafa, Egocentric vision by Michael Wray and becoming an entrepreneur by Graham Finlayson. At this point in the week, I was starting to become a little overwhelmed by the amount of information I had taken in on a range of highly technical topics. I think that it could have been more beneficial to have a slightly less dense schedule of lectures and mix in some workshops or seminars to fully take in all of the presentations. Despite this, I did find a lot of value in the lectures on this day, particularly the unsupervised learning lecture in the morning. The evening social event was a relaxed computer vision pub quiz, with a mix of themed questions about computer vision, AI, local and general knowledge. This was again a good time to get to know the other attendees and I thoroughly enjoyed it despite missing out on first place by a couple of points (I blame that on the winning team having a local).

Friday morning consisted of the last couple of lectures of the event. The first one, Art and AI by Chrisantha Fernando being particularly insightful and perhaps my favourite of the week. This lecture, by a Deepmind researcher looked at the state-of-the-art generation models such as Dall-E and asked whether an AI could actually create something more than a picture but what we would consider real “Art”. To examine this idea the speaker then dissected what we mean by the term “art” and emotions using computational terms and ideas and discussed the possibility of AI art through this viewpoint. I found the mix of cognitive science, computer science and philosophy to be very engaging as this cross section of AI is where my own passion for the subject lies.

After the event finished at midday, I met some of the speakers, organisers and attendees for lunch to chat and reflect on the week. Overall, I found the summer school very enjoyable, if not a little bit lecture heavy, and would definitely attend again. I came back from the trip eager to try out some of the more intriguing models and architectures discussed and I will also be going back over some of the key slides when they are released.